Boats Tasmania is the state’s leading marine surveying consultancy. We provide pre-purchase and insurance surveys as well as project management services for construction, repairs or refitting. Over the last 15 years, we have surveyed hundreds of vessels in Tasmania and around Australia and offer a wealth of practical knowledge and experience on a diverse range of vessels.

Based in Margate and Kettering south of Hobart, we are ideally located to serve the needs of the many boating enthusiasts who flock to Australia’s southern-most boating mecca, but also travel further afield to other parts of Australia and internationally upon request.

Building on the legacy of BoatTasmania founder, Patrick Synge, Denis Planchon brings to Boats Tasmania many years of wide-ranging experience sailing, inspecting, building, repairing and designing a variety of crafts. 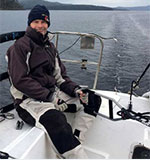 I spent 26 years as an officer in the French navy and learnt the fundamentals of naval engineering and design at the French Naval academy in Brest before practising them extensively during my naval career.

My first operational posting was on one of the last timber boats of the French navy, an ex-mine sweeper in New Caledonia in 1985. I then spent much of my operational career on French aircraft carriers.

I have since owned several yachts, including a Sun Legende 41 (Jeanneau), a fast Schionning catamaran .50 built in New-Zealand, a Farrier trimaran F22, a Davidson 34, an Adams 13m and currently a Holman and Pye 52’ aluminium ketch which is berthed at Oyster Cove Marina in Kettering.

I loved racing when I was young and although I do not race extensively anymore I still like to sail fast!

After retiring from the French Navy in 2009, being passionate about boatbuilding, I decided to work in a boatyard in New Caledonia where I worked mainly in composite boat building and learned “hands-on” the subtleties of fibreglass, Kevlar, carbon, epoxy and polyester resin. I then established my own business in Noumea, in partnership with a young naval architect, and was involved in numerous refit projects on both motor and sailing craft.

The technical and operational experience gained in the French Navy, combined with the skills learned working on composite boatbuilding and my extensive experience of sailing on numerous and various boats, led me to the field of marine surveying and my collaboration with Patrick.

Each new encounter with a boat, her owner and their common story is always an exciting challenge and a source of learning and sharing.